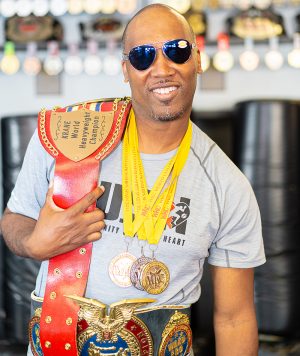 Reginald Perry is the founder and Executive Director of P.U.S.H.  He is a Boston native, born in Dorchester, MA. And raised in Boston’s Back Bay. Reginald is the former owner of Perry’s Martial Arts &Fitness in Waltham, MA, which he ran until 2018, completing a successful 22 years in business. During that time, Reginald partnered with, and managed seven (7) satellite Martial Arts Programs throughout the Greater Boston Boston areas of Cambridge, Belmont, Wellesley, and Sudbury.

Reginald has always maintained a strong sense of giving back to the community hosting many local fundraisers. Reginald added a fundraising element to his Black Belt program to raise money. For the past fifteen (15) years the Black Belt candidates have been called upon to manage the Thanksgiving Turkey Brigade.  The Thanksgiving Turkey Brigade is a project in which the candidates are called on to manage a drive to feed the areas needy families of the Waltham and Metro West Boston. Please reference Appendix B For List of  Perry’s Black Belt Program Donations / Fundraisers.

Reginald is the proud alumni of the M.E.T.C.O Program, an urban busing program graduating from Belmont High School in 1987. Reginald then went on to the University of Massachusetts in Amherst, MA where he majored in Communications and graduated in 1991.